Jeff Tweedy (born August 25, 1967 in Belleville, Illinois, United States) is an American singer-songwriter, musician, and poet best known for his work with the group Wilco. Tweedy joined rockabilly band The Plebes with high school friend Jay Farrar in the early 1980s, but Tweedy's musical interests caused one of Farrar's brothers to quit. The Plebes changed their name to The Primitives in 1984, and subsequently to Uncle Tupelo. Jeff is also a member of Golden Smog 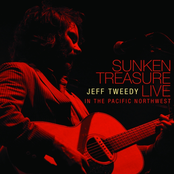